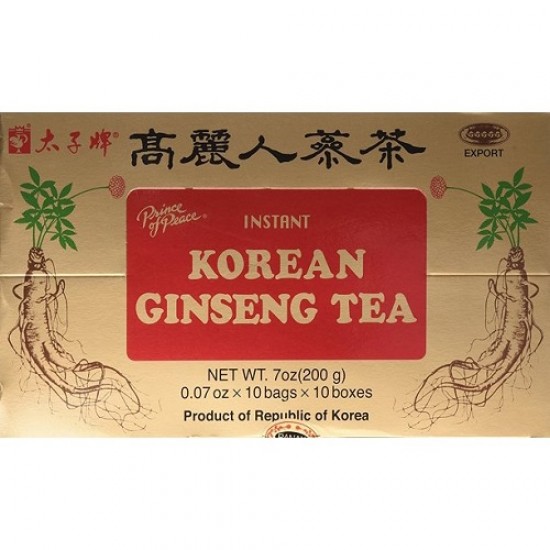 Prince of Peace Korean Ginseng Tea has a sweetly aromatic flavor. It is quite mild and unobtrusive. The light flavor of this ginseng tea can be made sweeter by adding in some honey or other sweetener, as is suggested on the box. This tea is light and soothing and can be enjoyed hot or cold, depending on your preference. It is commonly enjoyed after meals to improve digestion.

Each box like this comes with 10 individual packets. The serving size is one bag and each serving contains 10 calories, no fat, no cholesterol, no sodium, two grams of carbs, one gram of sugar, and no protein. As you can see, this tea is very light and simple.

Traditionally, ginseng has been used in a preventative manner rather than being used to cure particular ailments. Since ginseng is not specific, it is able to normalize one's health, regardless of the situation. General effects of ginseng include improved memory and sensory awareness, increased mental performance and augmented learning. The basis of this increased performance is believed to be due to certain chemicals in ginseng that increase the brain's activity without effecting adrenal glands. This results in general mental arousal without hyperactivity or a crash that some people experience from coffee or energy drinks.

Based on 0 reviews. - Write a review
₦5,500
Add to Cart
Buy Now Ask Question
Add to Wish List Compare this Product
Tags: Ginseng Teas
We use cookies and other similar technologies to improve your browsing experience and the functionality of our site. Privacy Policy.